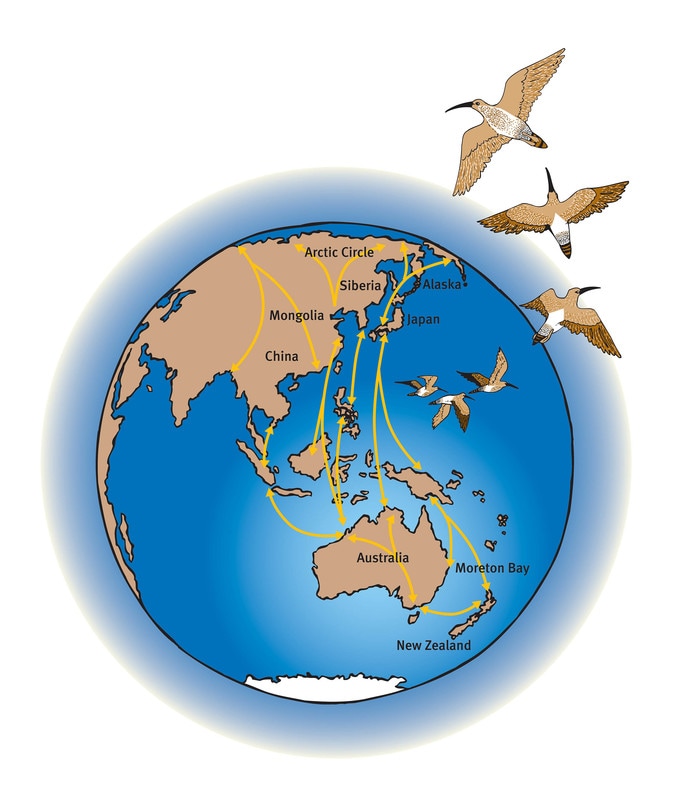 US Fish and Wildlife Service: www.fws.gov/migratorybirds/shrbird/shrbird.html

The Partnership for the East-Asian Australasian Flyway: http://www.eaaflyway.net/

The Ramsar Convention on Wetlands: http://www.ramsar.org

The significance of the Flyway
‘From a human perspective, Australasia and the countries stretching along the Pacific Rim are already connected in important ways – by history and commerce, alliances and agreements. Less frequently, however, do we consider the ecological connections between these nations, spun by the dramatic journeys of migratory birds. Their globe-spanning flights link countries separated by thousands of kilometres, as well as those separated by ideology, language and culture. In a world where diplomacy can seem a daunting challenge, these avian ambassadors fly readily from country to country, with dependence on all but allegiance to none.‘A feather grown to grace the breast of a godwit in New Zealand may someday be used to line the nest of a tundra-dwelling songbird near the Bering Sea. Tiny grains of stony detritus washed down from the highlands of central China may frame the burrow of a mud-dwelling worm in the Yellow Sea, a worm that helps fuel the flight of a Great Knot when it stops en route from the tropical coast of Australia to the windblown summits of the Chukotka Peninsula. Near the shores of the Sea of Ohkotsk, a young Nordmann’s Greenshank may leap from its nest in a tree to gorge among the wetlands of Sakhalin, only to fall prey months later to a hungry raptor along the shores of the South China Sea. A singing male Spoon-billed Sandpiper may perch atop the weathered rib of an Arctic whale at the summer solstice, then leave dainty tracks across the vast grey tidal flats of the Bay of Bengal before the autumnal equinox. Undaunted by the borders drawn on our two-dimensional maps, these feathered travellers remind us that we are connected in ways more profound and substantive than those set forth in the carefully crafted phrases of treaty and trade.’From ‘Time is Running Out’ by Brian McCaffery, Chapter 1 of  Invisible Connections: why migrating shorebirds need the Yellow Sea by Jan van de Kam, Phil Battley, Brian McCaffery, Danny Rogers, Jae-Sang Hong, Nial Moores, Ju Yung-ki, Jan Lewis and Theunis Piersma. CSIRO Publishing, Collingwood, Victoria, Australia, 2010.

One visitor: the Bar-tailed Godwit
Bar-tailed Godwits breed beyond the Arctic Circle during the tundra’s brief summer. In the few short weeks when snow and ice recede, they gather for an annual explosion of life: feasting, mating, nesting. Then, as the snowclouds muster, as they always do, the birds gather and set flight, lacing the sky with skeins of life, flying fast and straight to escape the cold.

Guided by the sun, the stars, the sound of the waves, the smell of the sea, and a set of maps as old as their species, the birds chase the sun. Ancient knowledge draws them on. They fly over land and over sea. They fly by day and by night. They fly through our dreams, dark silhouettes against the stars. They travel down the coast of Asia, where they sometimes stop on mudflats in huge restless flocks to call and eat, searching for crabs and sandworms with their soft-tipped bills, to fuel the remaining miles across the ocean.

The first birds begin to reach their destination by August. They alight in Australia or New Zealand, with shrunken organs and frayed wings, their weight halved. Many of their number are lost to the perils of their journey. Here they rest, recover, and wait out the boreal winter.

They do not nest in the south. They do not mate in the south. Their cries are a different, softer language of warning and contentment – a contrast to the strident mating calls that echoed through the northern skies. They eat and moult, waiting for the ancestral voices to stir them with the longing to return north.

Keep up to date with all the news